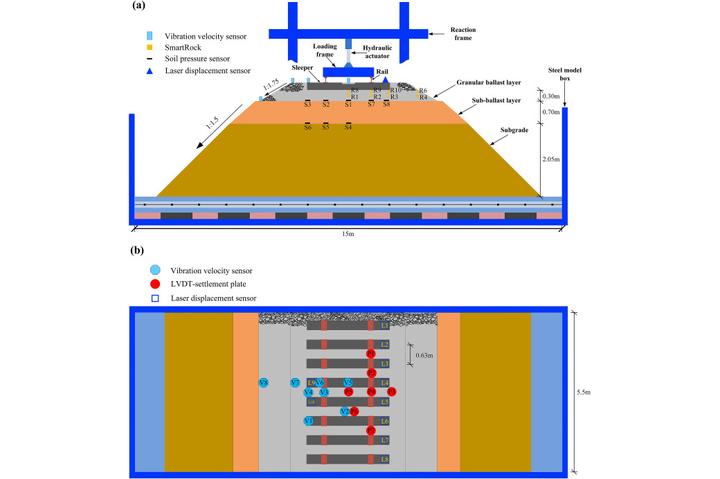 With increasing train speed and wheel axle load, severe vibrations can occur in a ballasted trackbed, thereby accelerating the degradation of the ballast particles and ultimately causing excessive settlement. To gain insights into the long-term trackbed behavior and the ballast degradation evolution, a full-scale ballasted track experiment with eight sleepers was designed and tested on a validated physical model test platform (ZJU-iHSRT). Sieving analysis together with computer-aided ballast morphology analysis were adopted to quantify the ballast degradation in terms of both the ballast particle size and morphological evolution, after every 100,000 train carriages.

Various sensors were installed at key locations in the trackbed to record the dynamic stress responses, vibration velocities and deformations under train moving loads for up to 500,000 train carriages in total. The movements of individual particles inside the ballast layer were also captured using “SmartRock” wireless sensors. The dynamic soil stresses and vibration velocities in the trackbed all peaked at the locations underneath the rail seat and decayed with the distance away from the rail seat. Severe ballast degradation occurred in both particle sizes and morphological properties, with the ballast particles in the middle zone under the sleeper suffering a greater breakage due to the stronger confinement.

The long-term train loads densified the ballast layer, both through particle rearrangement and particle breakage filling the voids in the ballast bed, resulting in a reduction in the stresses and vibrations. The amplitudes of the vertical stresses and the vibration velocities in the trackbed around the rail seat were reduced by over 25% and 38% respectively after 500,000 train loading carriages. The ballast particle shape became more compact after the test, with larger diameter and more Platy, Bladed and Elongate shapes found to be the more likely to degrade. Over 50% of the permanent settlement of the ballasted trackbed resulted from the ballast layer deformation, and the increase in the train speed intensified particle movements away from the sleeper in the lateral and longitudinal directions in the ballast layer and accelerated the development of the accumulated settlement, while the increase in the axle load caused the ballast breakage index (BBI) to rise dramatically by over 50% and contributed significantly to a greater settlement.