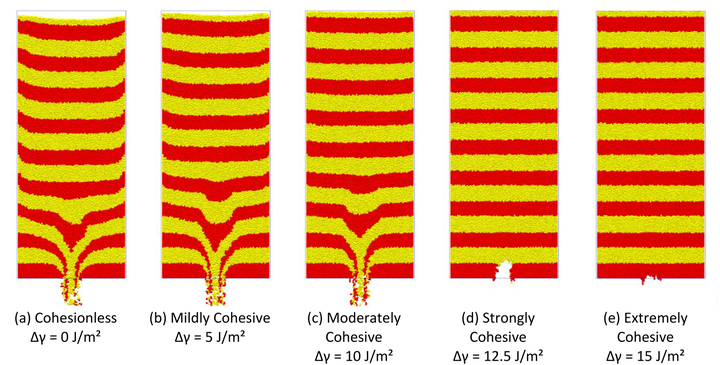 Discrete Element Method simulations of both experiments were carried out and the predictions were compared with the experimental observations. A recently developed DEM contact model for cohesive solids, an Elasto-Plastic Adhesive model, was used. This particle contact model uses hysteretic non-linear loading and unloading paths and an adhesion parameter which is a function of the maximum contact overlap. The model parameters for the simulations are phenomenologically based to reproduce the key bulk characteristics exhibited by the solid. The simulation results show a good agreement in capturing the stress history dependent behaviour depicted by the flow function of the cohesive iron ore fines while also providing a reasonably good match for the lateral pressure ratio observed during the confined compression K0 tests. This demonstrates the potential for the DEM model to be used in the simulation of bulk handling applications.